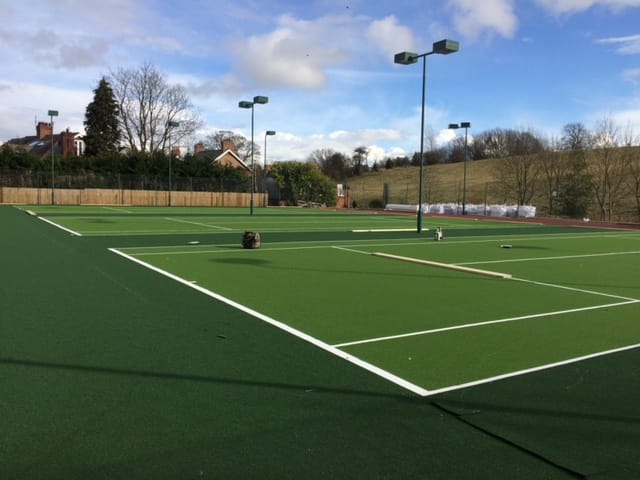 Four months on from the project and we asked Chairman John Wiseman, what he thought of the new courts and how the club has benefited from STM’s install.

Why did you choose artificial turf for your project?

Wiseman: “Artificial turf is seen as the ‘standard’ club surface for tennis clubs and so our members had an expectation that our next surface should be artificial turf”.

What was the aim of your project?

Wiseman: “We wanted an artificial turf surface that we could lay on top of our tarmac surface and that would play well, be attractive and have a good life expectancy”.

How have you benefitted from your new surface?

Wiseman: “The new TigerTurf surface, laid by Synthectic Turf Management, looks very attractive and our members and visitors think it plays brilliantly.  Our membership in this first year has increased by almost 50% already”.

How would you rate the work that has been carried out?

Wiseman: “The committee was delighted that the works were carried out efficiently and this meant that the courts were closed to members for a relatively short space of time, and that duration was before the season really started.  That the work was done in a timely manner was in large part down to the close communication between STM and the Wylam Tennis Club committee.  There were no snags and no defects have emerged over four months of play.  The whole club is delighted with the surface and the workmanship”.

Has anything changed as a result of the new surface?

Wiseman: “Our members clearly enjoy playing on the new courts.  We are seeing more members at Club sessions and the membership of the club has increased by almost 50% in the first four months of us having the new courts”.

Wiseman: “The Club organised a Grand Opening of the new courts on 7th July 2018 and the weather was extremely kind.  The bodies who helped fund the project were there as was the local county councilor.  We held an event for juniors and a large number of their parents came to support and we also held a competition for the adult members of the club.  The Courts were opened by Chris Lott the chairman of the Northumberland Lawn Tennis Association and at the same time one of the courts was dedicated to Alex Hendrick who had given exceptional service to the club over many years.  With Synthetic Turf Management sponsoring some food and drink for the event It felt like a party and it was a great way to formally open the new courts.  In spite of the ceremony clashing with the England World Cup quarter final match there were loads of people there and a good time was had by all”.

STM would like to give huge thanks to John Wiseman and everyone at Wylam Tennis Club!